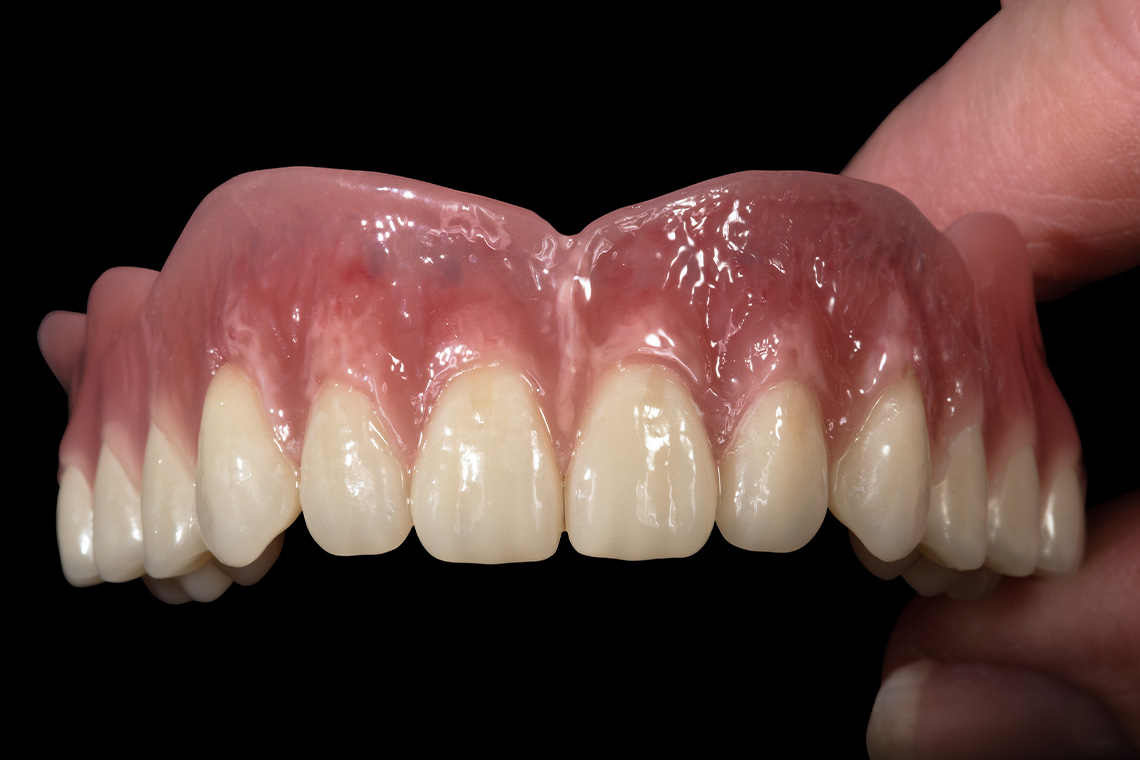 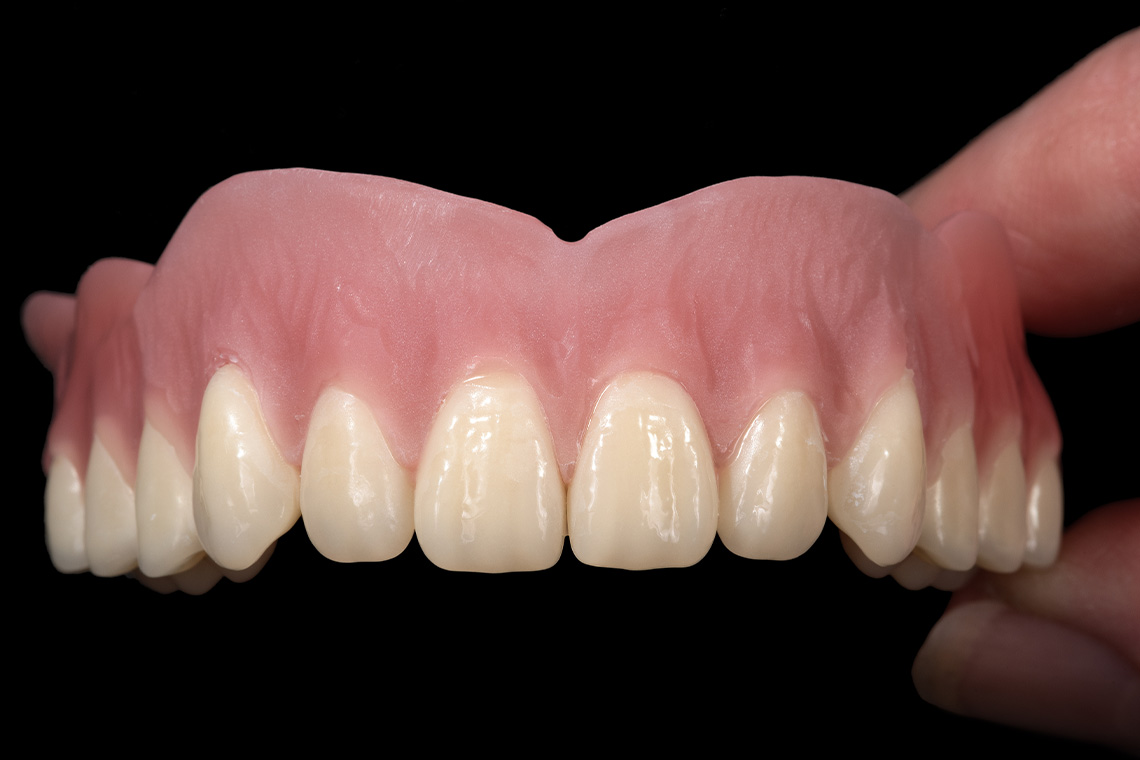 Thanks to new technological milestones, digital dentures are becoming increasingly common in laboratories. The benefits of digital dentures include efficient fabrication, a good fit without delays, and in the case of loss or damage, reproduction at the touch of a button. Providing the denture base with anatomical morphology is possible in the design software in exactly the same way as using a wax knife and modeling instruments. In addition, as a single-tooth, non-block solution, VITA VIONIC VIGO already provides the necessary leeway for gingiva during virtual designing of the denture bases. However, until now, the characteristic shade effect of the labial frenulum, blood vessels, alveolar ridges and unattached and attached gingiva, could only be reproduced with analog craftsmanship and a brush. This is where the VITA AKZENT LC light-curing composite stains with their multi-facetted effects come into play, turning the labial shield into a canvas of creativity.

The labial shield as a canvas of creativity

For micro-retentive adhesion, the labial shield was recontoured using an acrylic bur and the corresponding area sandblasted with aluminum oxide. Finally, a brush was used to bring the monochromatic base to life in the esthetic zone. For this purpose, VITA AKZENT LC EFFECT STAINS were used in the blue, pink, white and dark-red shade effects. To characterize the attached gingiva and the labial frenulum, a 1:1 mixture of white and dark-red was prepared on the mixing palette. This was used to gently redraw the labial frenulum, and to recontour the shape and shade of the alveolar ridges in the area of the attached gingiva from 13 to 23. In doing so, the unattached marginal gingiva directly surrounding the cervical areas was left out to create a reddish appearance in the alveolar arches. Under the tapered alveolar process and in particular in the concave areas of the labial shield, the mucosa was reproduced using a 1:1 mixture of dark-red and pink. Finally, veins and arteries in the oral mucosa were simulated using blue and dark-red. Intermediate curing was performed for each step using the dental curing light to ensure that the stains were fixed before applying the next substance. After the entire customized area was leveled using VITA AKZENT LC GLAZE, the denture was placed in the light furnace for final curing. 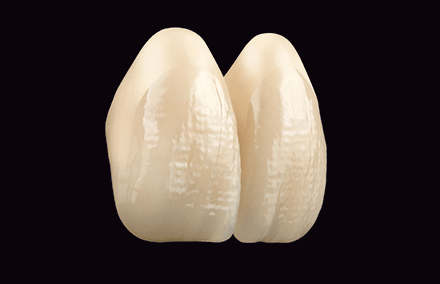 The VITA VIONIC VIGO denture tooth was designed especially for the digital workflow. 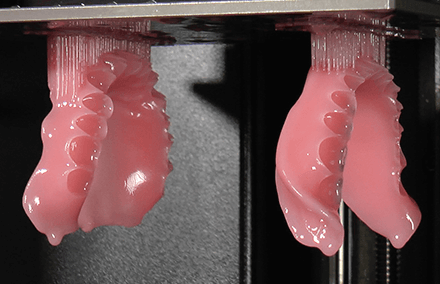 In this case, both denture bases were fabricated additively as part of the digital workflow. 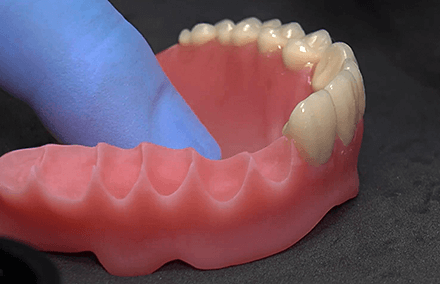 The precise and simple bonding of denture tooth 21 in the alveolus of the denture base.

A mixture of VITA AKZENT LC white and dark-red was prepared on the mixing palette. 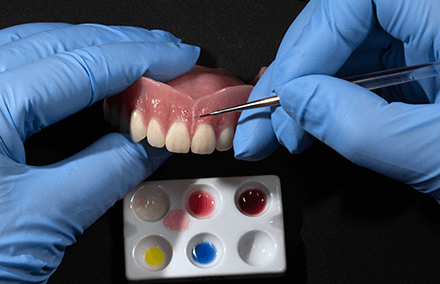 The characterization of the labial frenulum using the mixture of the VITA AKZENT LC EFFECT STAINS white and dark-red. 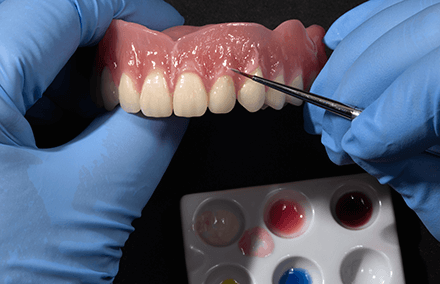 In the area of the attached gingiva, the alveolar process was characterized and recontoured at the same time. 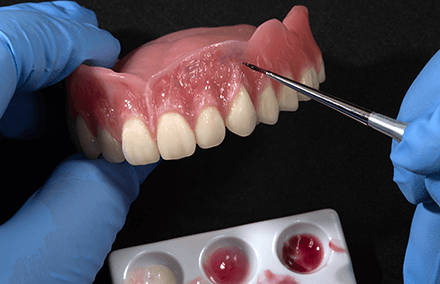 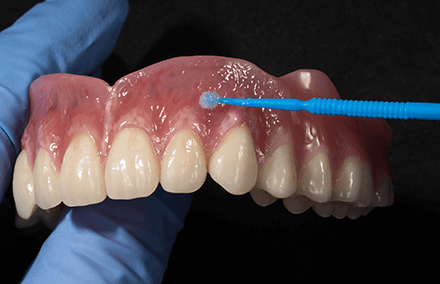 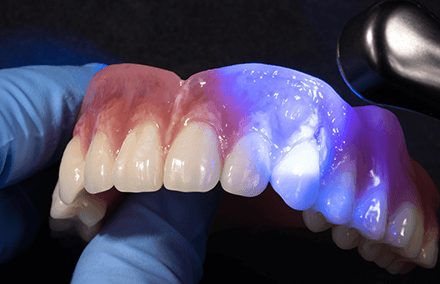 For each intermediate step during characterization, the dental curing light was used for curing. 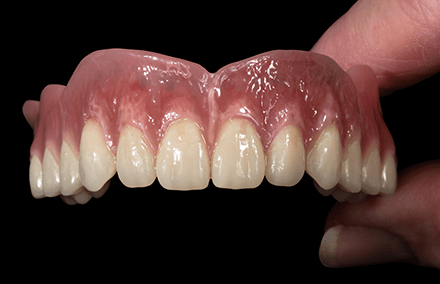 The result after final curing of the complete characterization in the polymerization device.