High-tech in the dental factory

Live from the robot production!

Excess pressure is maintained in the room to keep dirt particles completely out. The machine operators are met by a sticky doormat when they enter. The VITA-designed production plant for denture teeth is continuously used. Guests are greeted by a variety of background noise, including regular hisses, clicks and vibrations.

Right at the entrance, the composite materials are stored in deep freezers. Maturation is put on hold in the packaged dough. Enamel, dentin, and cervical materials are waiting to be cured in a strong bond to create denture teeth.

The time has come: The dough is removed and precisely rolled out to the required plate thickness. Professionals call this calendering. After cutting, the composite mass is placed on special plates, which will later be used by the robot arms. These prepared material plates are stored on call in a refrigerator until the production line accesses them.

The robot arm elegantly swivels towards the plate, picks a precise portion of the dough with its instrument like a bird, and places it in the intended nest of the tooth mould. The mould then quickly moves to the next work step. A foil is positioned over the tooth mould as a separating layer. A suitable counter piece immediately comes from above like a stamp, where the material should not stick. Now it gets loud: The enamel materials are formed with pressure and vibration. The same happens afterwards with dentin and cervical materials. Finally, the plastic mass is positioned in the middle of the mould and the counter mould for subsequent compaction.

Under pressure and temperature, the denture teeth are finally pressed in a single cast at a precisely defined time interval. 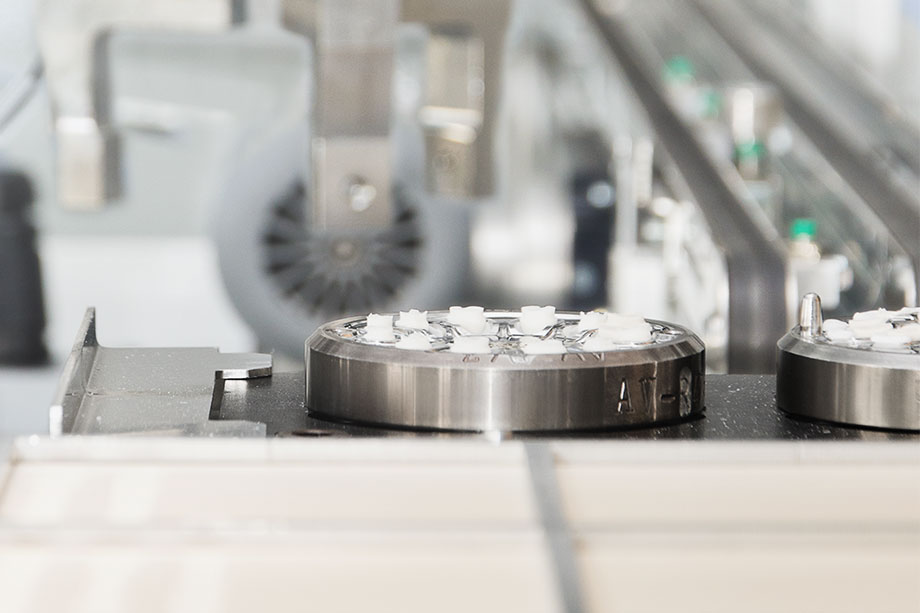 Dentin, cervical and incisal materials are automatically inserted into the tooth moulds. 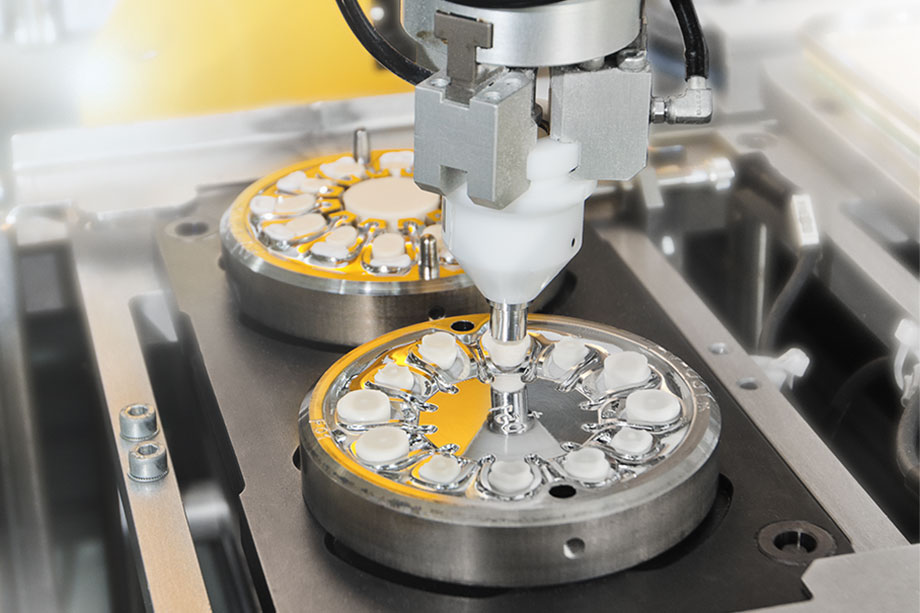 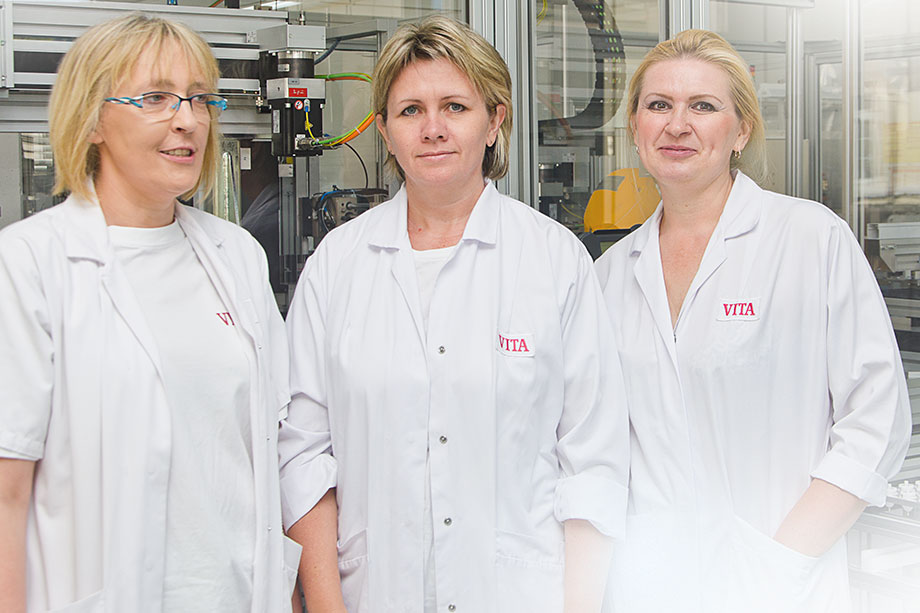 The machine operators in front of the production line.

VITAPAN EXCELL: Proven by numerous technicians all over the world 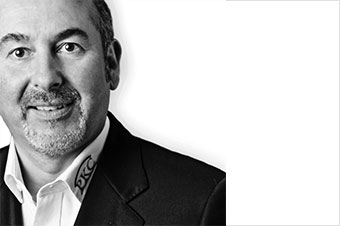 DV: Mr. Frerichs, what criteria does a modern dental prosthesis have to meet from your point of view?

Conrad Frerichs: It must provide a balanced overall composition in terms of esthetic criteria, such as natural shapes, good light transmission, lively shade play, etc. In addition, it must also be compatible with the various modern composites and veneering materials.

DV: What do you think of the shape of the VITAPAN EXCELL?

Conrad Frerichs: The new anterior tooth is very beautifully shaped. Among other things, we are impressed by the harmonious length/width ratio. The body of the tooth appears less voluminous than the VITA PHYSIODENS, for example.

DV: What are the advantages of the unique layered structure of the new denutre tooth?

Conrad Frerichs: The layered structure of the new denture tooth is characterized by a balanced light transmission - translucent enough for a lively appearance and at the same time sufficiently masking for use in combination prosthetics. 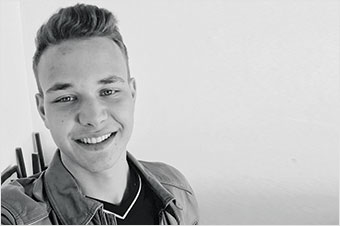 DV: Mr. Strasser, what can you tell us about the shade play and play of light of the new denture tooth?

Benjamin Strasser: The layering of the denture tooth follows the shade gradient of natural teeth and has a three-dimensional structure. Combined with the multifaceted surface texture, this produces an outstanding play of light.

DV: How does the new denutre tooth lend itself to processing and polishing?

Benjamin Strasser: In my experience, the tooth is easy to grind and polish. The material is homogeneous - not too soft for polishing - and the processed result has excellent edge stability. This makes for efficient processing.

DV: What are the best applications for VITAPAN EXCELL?

Benjamin Strasser: It is generally suitable for all prosthetic restorations. Personally, I have
come to value the new line of teeth for the production of customized restorations, especially for combination work. 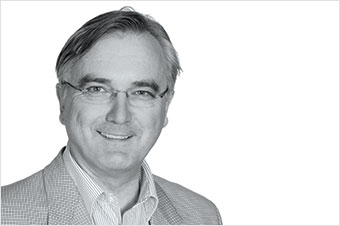 DV: Mr. Hoppe, how would you assess the shade accuracy of VITAPAN EXCELL with respect to the VITA Classical Shades?

Franz Hoppe: With VITAPAN EXCELL a readyto-use tooth has been developed which has very good shade accuracy on the VITA shade scale. In this case, VITA Zahnfabrik has analyzed many suggestions from practitioners and implemented them correctly.

DV: What kind of feedback have you received on this new generation of anterior denutre tooth?

Franz Hoppe: I received very positive feedback after the first trial from a patient who had previously been fitted with "traditional" prostheses with a less pronounced surface texture. He and his dentist were really enthusiastic about how natural the new anterior  tooth looked.

DV: How does VITAPAN EXCELL complement the VITA range of teeth?

Franz Hoppe: The new denutre tooth is the perfect addition to the VITA product range and gives dental technicians more freedom of choice. VITAPAN EXCELL bridges the gap between the highly translucent VITAPAN PLUS anterior teeth and the customized, accurate shapes of the VITA PHYSIODENS. With VITA, I am now able to find the right set of teeth for each patient, based on shape, shade and surface.

To the detailed report in DENTAL VISIONIST 2.7

The right mixture makes the difference.